Epidural analgesia (EA) is widely used as most effective analgesia for labor. As example, 78% of pregnant women in France deliver 2010 in EA. 10% to 20% of the 600 000 women given epidural analgesia during labor experience hypotension, which in 15% of cases is associated with fetal heart rate abnormalities. The efficiency of lower limbs venous compression in preventing the occurrence of maternal hypotension after neuraxial anesthesia has already been demonstrated, but only in the context of scheduled cesarean section. We assessed the preventive effect of medical lower limbs venous compression on the incidence of maternal hypotension after epidural analgesia during spontaneous term labor.

This before/after, single-center study in a university hospital included 93 women in spontaneous labor at term who between 1 January and 31 March 2015 with epidural analgesia plus lower limbs compression and 202 women in spontaneous labor at term who delivered between 1 and 31 December 2014 with epidural analgesia without lower limbs compression (control group). The main outcome was maternal hypotension (systolic blood pressure < 90 mmHg and/or delta > 20%) in the 15 min after epidural analgesia. Several secondary maternal and fetal endpoints were investigated, including incidence of neonatal fetal acidosis, incidence of a 5-min Apgar score > 7 and frequency of maternal discomfort associated with the use of compression stockings.

Finally, medical compression of the lower limbs constitutes an attractive mean to prevent maternal hypotension as it is a simple, and non-pharmacological method, well accepted by women. In our study, we observed no side effects and the women were satisfied with wearing compression stockings, only two women refused inclusion because of the pain.

Maternal hypotension is a frequent event during epidural or spinal anesthesia during cesarean section delivery or spontaneous labor. This causes maternal discomfort with malaise, nausea and vomiting and may alter maternal-fetal gas exchanges, induce fetal heart rate abnormalities. The benefit of lower limb compression for hypotension after cesarean section has already been demonstrated in other studies (1). Interestingly the use of compression stockings during pregnancy may not only reduce leg swelling, feeling of heaviness and discomfort of the legs but also nausea and vomiting independently from delivery or anesthesia (2). This is the first study showing that medical lower limbs compression (20 – 36 mmHg) in women in spontaneous labor at term, could also significantly reduce the incidence of maternal hypotension following epidural analgesia.

Lower leg compression with medical compression stockings is an easy non-pharmacologic method to prevent maternal discomfort during pregnancy and during delivery and should be recommended to all pregnant women, not only to those with venous disease.

People with chronic venous insufficiency who develop leg ulcers face a difficult condition to treat. Venous leg ulcers may persist for long periods of time and have a negative impact on quality of life. Treatment requires frequent health care provider visits, creating a substantial burden across health care settings. The objective of this health technology assessment was to evaluate the effectiveness, safety, cost-effectiveness, budget impact, and patient experiences of compression stockings for prevention of venous leg ulcer recurrence.

We conducted a systematic review of the literature to identify randomized trials and observational studies examining the effectiveness of compression stockings in reducing the risk of recurrence of venous leg ulcers after healing and/or reported on the quality of life for patients and any adverse events from the wearing of compression stockings. We conducted a cost–utility analysis with a 5-year time horizon from the perspective of the Ontario Ministry of Health and Long-Term Care.

We compared compression stockings to usual care (no compression stockings) and simulated a hypothetical cohort of 65-year-old patients with healed venous ulcers, using a Markov model. Model input parameters were obtained primarily from the published literature. In addition, we used Ontario costing sources and consultation with clinical experts. We estimated quality-adjusted life years gained and direct medical costs. We conducted sensitivity analyses and a budget impact analysis to estimate the additional costs required to publicly fund compression stockings in Ontario. We spoke to people who recently began using compression stockings and those who have used them for many years to gain an understanding of their day-to-day experience with the management of chronic venous insufficiency and compression stockings.

There was some uncertainty in our results, but most simulations (> 70%) showed that the incremental cost-effectiveness ratio remained below $50,000 per quality-adjusted life-year. We estimated that the annual budget impact of funding compression stockings would range between $0.95 million and $3.19 million per year over the next five years.

People interviewed commonly reported that chronic venous insufficiency had a substantial impact on their day-to-day lives. There were social impacts from the difficulty or inability to walk and emotional impacts from the loss of independence and fear of ulcer recurrence. There were barriers to the wearing of compression stockings, including replacement cost and the difficulty of putting them on; however, most people interviewed reported that using compression stockings improved their condition and their quality of life.

The available evidence shows that, compared with usual care, compression stockings are effective in preventing venous leg ulcer recurrence and likely to be cost-effective.

In people with a healed venous leg ulcer, wearing compression stockings helps to reduce the risk of recurrence by about half.

Publicly funding compression stockings for people with venous leg ulcers would result in additional costs to the Ontario health care system over the next 5 years.

The annual costs for venous ulcer treatment are high. In Germany direct and indirect costs summarize to about 10.000 €/year (1). There is GRADE 1A evidence from several randomized controlled studies available demonstrating, that medical compression stockings (MCS) improves healing and helps to prevent recurrence of venous leg ulcers (2).

In addition, compression reduces pain and discomfort in ulcer patients (2). Nevertheless, MCS are not frequently used after ulcer healing, leading to a high recurrence rate (3).

One of the reasons is that MCS are not reimbursed by the medical insurance system or for other reasons not frequently prescribed. This health technology assessment from Canada could show that in patients with healed ulcers, the routinely reimbursing and prescribing of MCS is cost-effective and significantly reduces ulcer recurrence and patients discomfort, despite the additional costs for the health care system. Considering current evidence, reimbursement of MCS after venous ulcer healing should no longer be a point of discussion. MCS use for ulcer healing and prevention of ulcer recurrence is a basic recommendation in all guidelines.

Compression Therapy to Prevent Recurrent Cellulitis of the Leg

Chronic edema of the leg is a risk factor for cellulitis. Daily use of compression garments on the leg has been recommended to prevent the recurrence of cellulitis, but there is limited evidence from trials regarding its effectiveness.

In this single-center, randomized, nonblinded trial, we assigned participants with chronic edema of the leg and recurrent cellulitis, in a 1:1 ratio, to receive leg compression therapy plus education on cellulitis prevention (compression group) or education alone (control group).

Patients were eligible to participate if they had a history of two or more episodes of cellulitis in the same leg in the 2 years before referral to the trial and had edema lasting longer than 3 months in one or both legs, with recurrent cellulitis. Patients were excluded from the trial if they were already wearing effective compression garments 5 or more days per week.

Follow-up occurred every 6 months for up to 3 years or until 45 episodes of cellulitis had occurred in the trial. The primary outcome was the recurrence of cellulitis. Participants in the control group who had an episode of cellulitis crossed over to the compression group. Secondary outcomes included cellulitisrelated hospital admission and qualityof-life assessments.

The majority of prescribed compression garments were knee-high compression stockings that included the foot, with or without the toes; less often, leg-andfoot compression wraps were prescribed.

A total of 183 patients were screened, and 84 were enrolled. The inclusion criteria at baseline were comparable in both treatment groups, 41 participants were assigned to the compression group, and 43 to the control group.

At the time of a planned interim analysis, when 23 episodes of cellulitis had occurred, 6 participants (15%) in the compression group and 17 (40%) in the control group had had an episode of cellulitis, and the trial was stopped for efficacy.

A total of 3 participants (7%) in the compression group and 6 (14%) in the control group were hospitalized for cellulitis. Most quality-of-life outcomes did not differ between the two groups. No adverse events occurred during the trial.

In this small, single center, nonblinded trial involving patients with chronic edema of the leg and cellulitis, compression therapy resulted in a lower incidence of recurrence of cellulitis than conservative treatment.

Prevention of cellulitis by means of prophylactic antibiotics can cause side effects, and the bacterial species precipitating cellulitis is usually unidentifiable, which hinders targeted antibiotic prophylaxis.

In comparison, long-term use of compression therapy has been recommended and has shown benefits in controlling edema in patients with chronic edema of the leg; in addition, its efficacy is not related to the causative bacterial species.

The mechanism by which compression therapy prevents recurrent cellulitis is not known.

The relationship between chronic edema and cellulitis is considered to be multifactorial: chronic edema provides a medium for bacterial growth, altered lymphatic function and decreased lymphatic drainage can impair the immune response to pathogens, and chronic edema can impair skin integrity, increasing susceptibility to entry of bacteria through the skin.

Compression therapy could potentially decrease the risk of cellulitis by lessening edema, improving immune response and skin integrity, and providing physical protection for the skin. Future studies could explore the role of these mechanisms in cellulitis associated with chronic edema of the leg.

Historic experiments have shown that it is only possible to provoke an episode of erysipelas ( = cellulitis) by rubbing in streptococci into normal skin, when the lymphatic system is damaged. Chronic edema is therefore a prerequisite for the development of this disease.

This thoroughly performed randomized controlled trial proves for the first time, that compression therapy is a very effective treatment modality to reduce the event of recurrent attacks of cellulitis in the lower extremity. It is shown that the leg volume can be reduced in the group who wore compression stockings despite of elevated BMI in most patients. Two participants in each group were using prophylactic antibiotics at the time of enrollment and continued using them throughout the course of the trial. 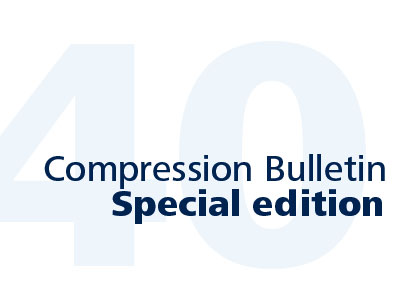