Constant standing or sitting impedes the flow of blood towards the heart. Under certain circumstances, this can lead to venous insufficiency, which is characterized by improperly functioning vein valves that interfere with venous return and cause the blood to pool in the veins. If left untreated, venous insufficiency can result in the formation of serious disorders, including phlebitis, pulmonary embolism, or ulcers. 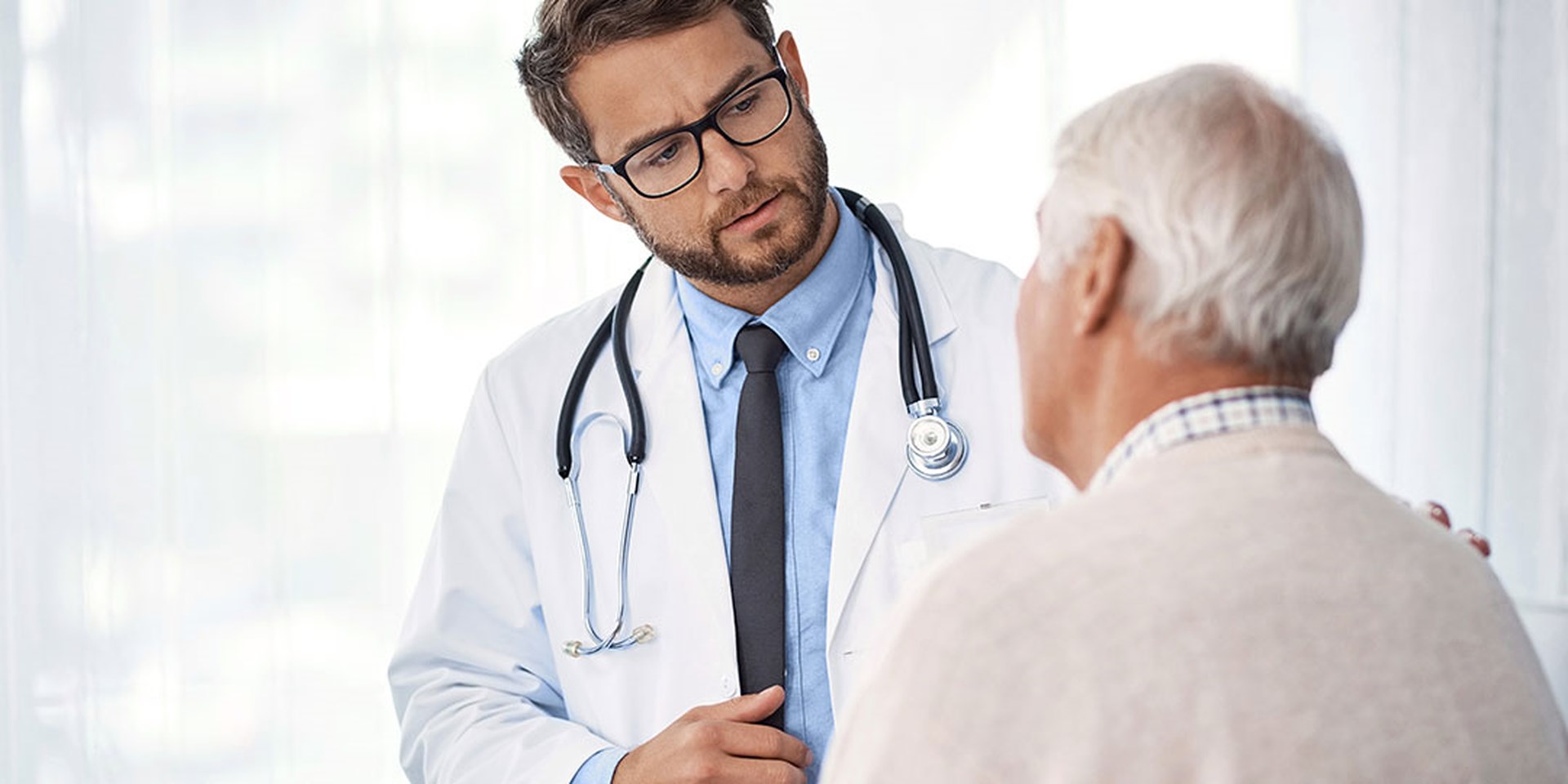 In the average sized adult, about 4 to 6 liters of blood are pumped through the body almost 1500 times a day. Thus, with approximately 7000 liters of blood that need to be returned to the heart every day, the heart and the venous system have a difficult job to do, especially because they must overcome the force of gravity to pump the blood upwards.

Leg veins can dilate for different reasons, venous hypertension being one of them. If the leg veins are dilated, the vein valves can’t close properly anymore. A venous reflux occurs when the blood leaks downwards and stagnates in the vein.

Persistent venous reflux and venous hypertension can further damage the internal walls of the leg veins and this can lead to chronic venous insufficiency that indicates the more advanced forms of venous disorders.

Acute manifestations of venous disease usually occur without pre-existing conditions, but can also be triggered by chronic venous disease and require medical treatment.

In both cases, chronic and acute venous disorders, compression therapy plays a fundamental role in the treatment concept.

The risk of developing chronic venous disorder depends on several factors such as sedentary lifestyle, smoking, surgery, age, gender, and more. Check our Risk factors page to find out more.

Constant standing or sitting impedes the flow of blood towards the heart. Under certain circumstances, this can lead to venous insufficiency, which is characterized by improperly functioning vein valves that interfere with venous return and cause the blood to pool in the veins.

Despite the fact that the severity of chronic venous insufficiency has diminished over the past 20 years, the data of this study clearly shows that venous disorders are still very common throughout the population. Watch our movie to learn more about venous disorders.

In patients with chronic venous disease, the internal walls of the leg veins are subjected to pathological changes due to hypertension or other reasons and deteriorate. This causes the leg veins to dilate, thereby preventing the valves from closing properly. This, in turn, causes a reflux, which is when the blood leaks downwards and stagnates in the vein, thereby leading to further venous hypertension and more advanced forms of chronic venous disorders. This condition is known as chronic venous insufficiency (CVI) which may result in edema, skin change and, in some cases, ulcerations.

To distinguish the different manifestations of CVD, the CEAP classification system is applied.

With C0S stadium, patients often describe a sensation of heavy legs, characterized by a feeling of discomfort, tiredness, and achiness in the legs. These symptoms are often experienced after sitting or standing for prolonged hours and occur in the evening – usually, they are not present in the morning or after waking.

In summer, the symptoms may increase due to the heat, and are typically associated with swollen feet and ankles. No visible or palpable signs of venous disease are yet present at this early stage of venous disorders.

Treatment and care of heavy legs Spider veins (also called reticular veins or telangiectasia) are small, dilated, superficial veins that correspond to a confluence of dilated intradermal venules less than 1 mm in caliber. They can be found in different areas of the leg. Reticular veins are dilated bluish subdermal veins, usually 1 mm to less than 3 mm in diameter. They are usually tortuous. This excludes normal visible veins in persons with thin, transparent skin.

Treatment and care of spider veins

Important to know: Before any treatment of spider veins is considered, it is essential to have a duplex ultrasonography done to assess if an underlying venous reflux is present or not. 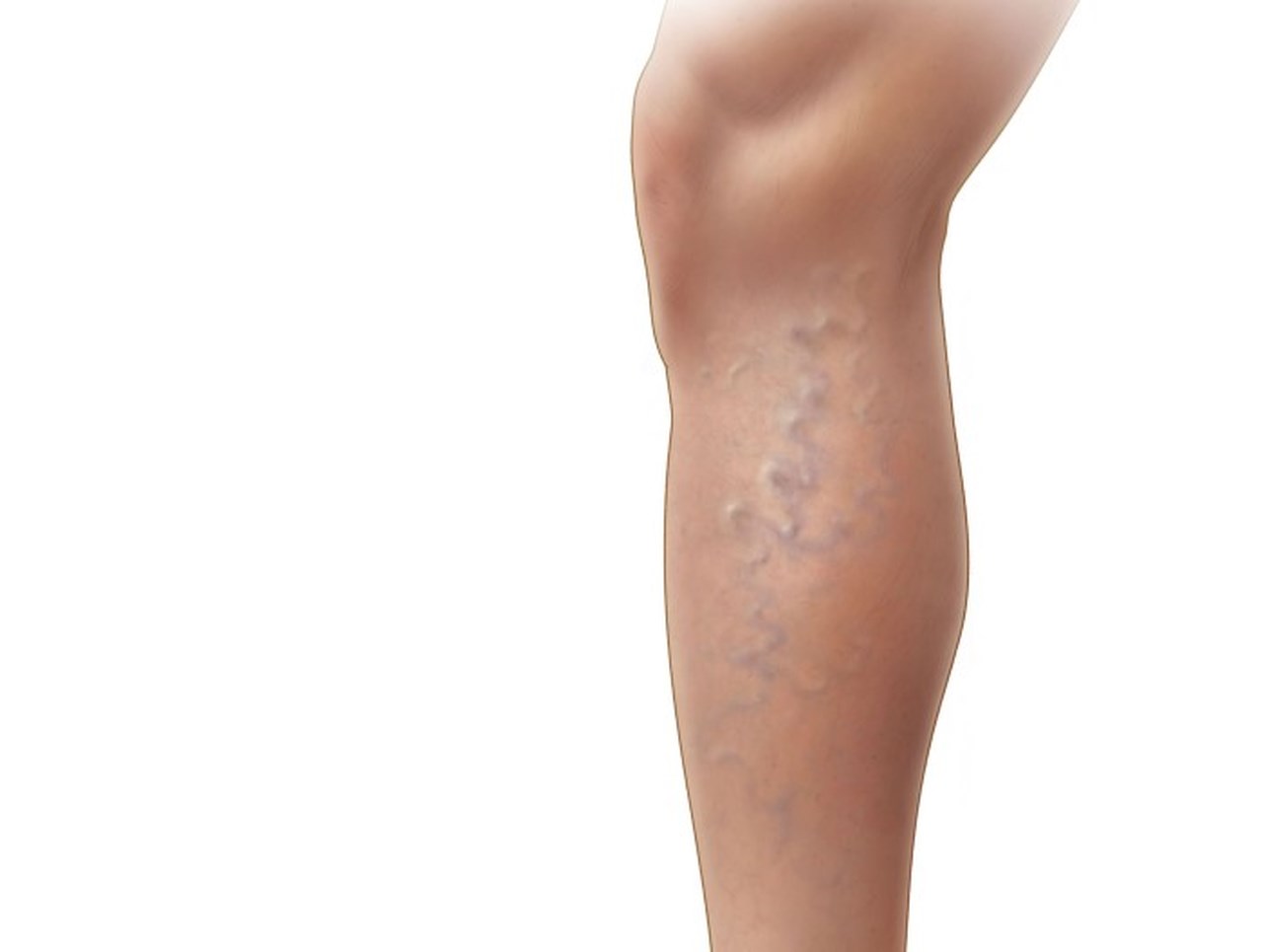 Varicose veins are subcutaneous, dilated, and tortuous veins 3 mm in diameter or larger. They have defective valves, causing venous stasis. Varicose veins can be found on the foot, calf, thigh, or entire leg, and affect nearly 30% of the world’s population.

Varicose veins can be painful or, on the contrary, totally painless. When symptoms are present, they include ankle and leg swelling, heaviness or fullness, aching, restlessness, fatigue, pain, cramps, and itching. There are many causes known for the development of varicose veins, such as age > 50 years, working for prolonged time in standing or sitting position, physical inactivity, obesity, heredity, pregnancy, and menopause.

Early diagnosis is essential to prevent worsening of venous disease. If left untreated, complications can include thrombophlebitis (inflammatory process causing a blood clot to form) and variceal bleeding.

Treatment and care of varicose veins 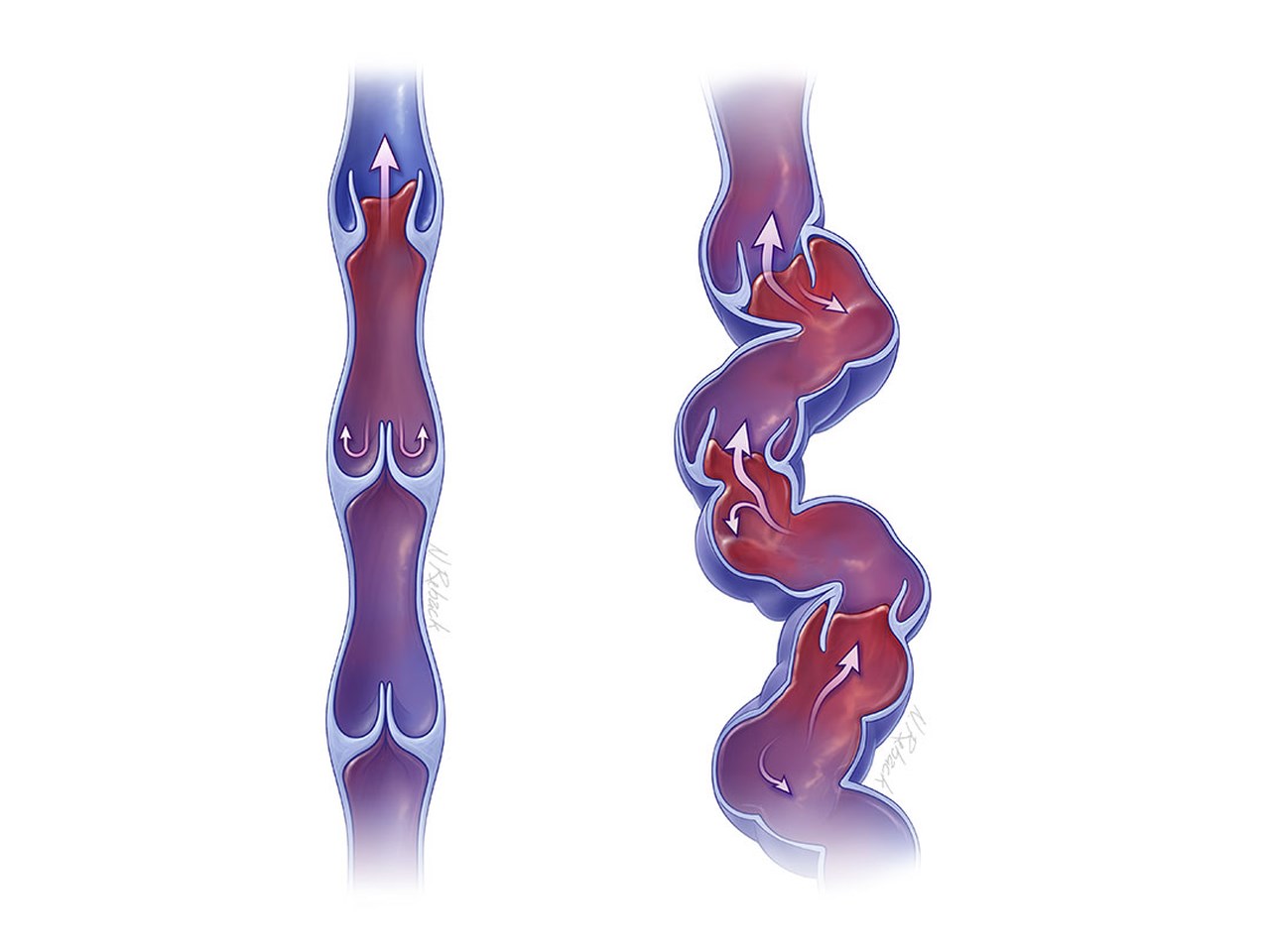 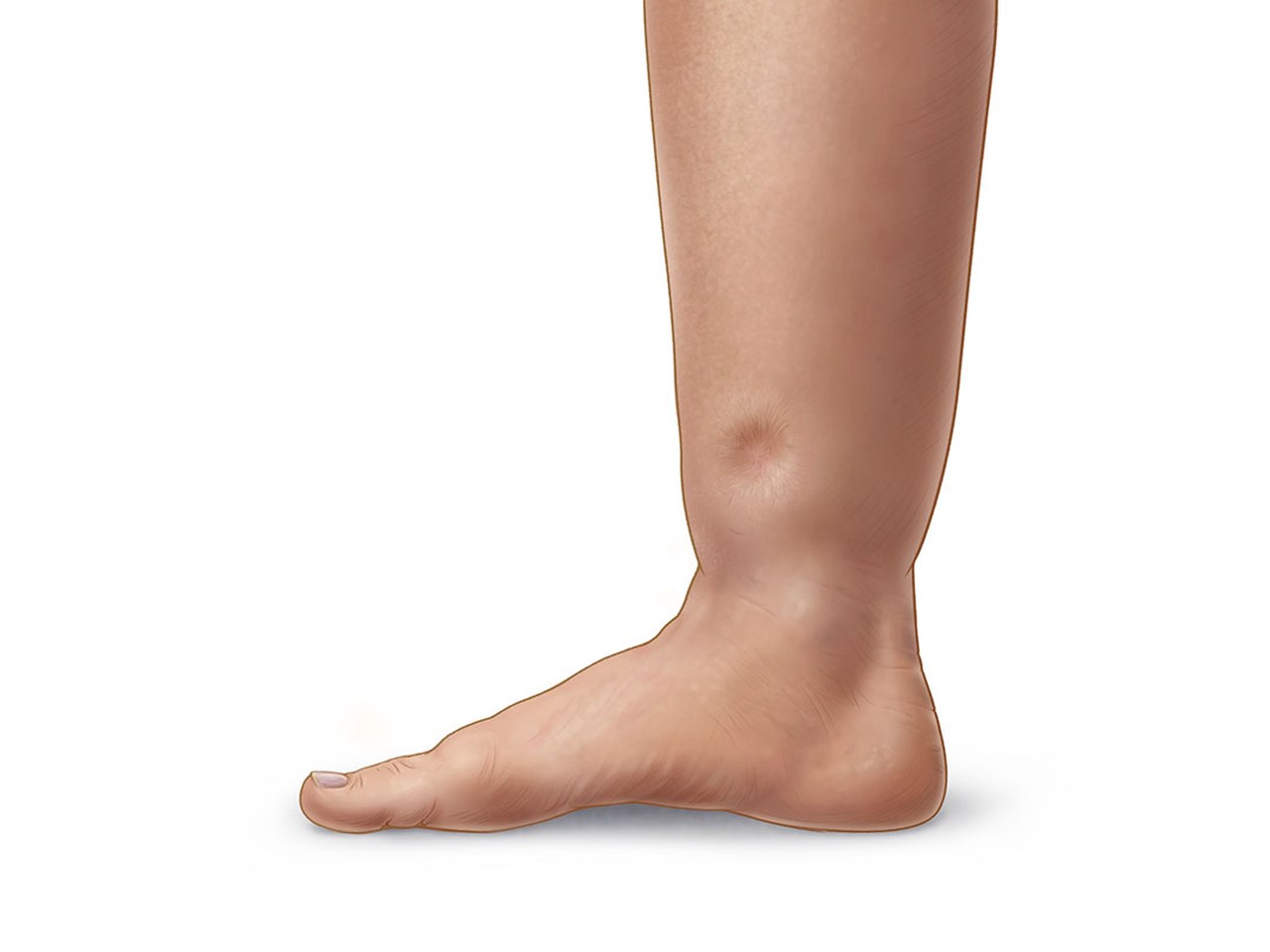 Edema is defined as a perceptible increase in volume of fluid in skin and subcutaneous tissue, characteristically indented with pressure. Venous edema usually occurs in the ankle region, but it may extend to the leg and foot.

There are many causes of edema, such as standing or sitting for long periods of time, physical inactivity, chronic venous disease, lymphedema, filariasis, heredity, pregnancy, surgery, and trauma.

Edemas of venous origin occur when blood stagnates in the veins, thereby preventing the capillaries from properly functioning and causing excessive fluid (water, electrolytes, proteins, dissolved substances) to build up in the skin and subcutaneous tissue.

Treatment and care of edema

Towards an individualized management strategy for patients with chronic venous disease: Results of a Delphi consensus

Eczema is an inflammatory reaction of the skin induced by blood stagnation in the veins. It is most often located near varicose veins, but it can be found anywhere on the leg. If left untreated, it can progress to blistering, weeping, or scaling eruption of the skin on the leg.

Treatment and care of eczema

Appropriate anti-inflammatory treatment should be provided if deemed necessary by the treating physician. 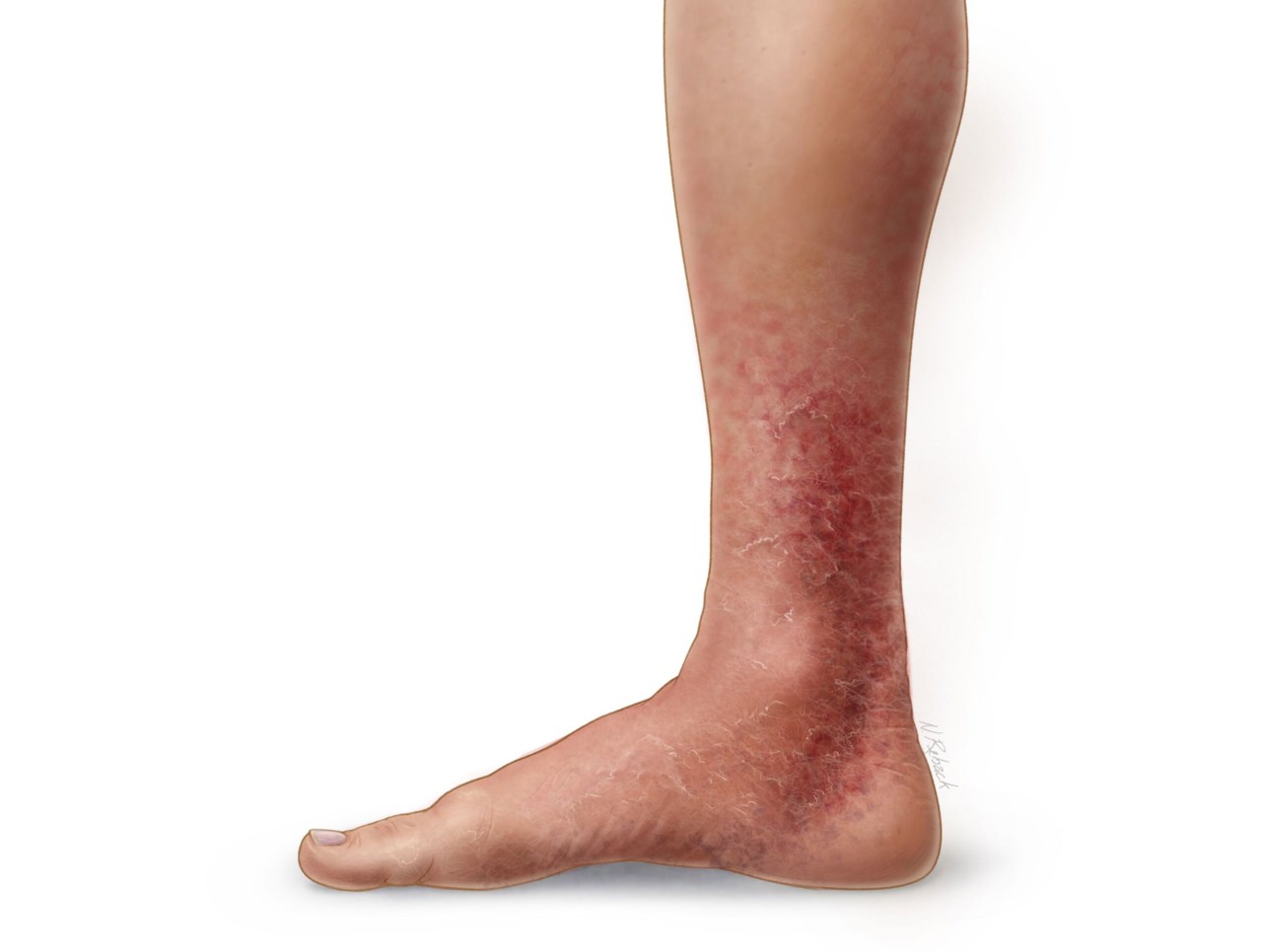 Pigmentation is defined by a brownish darkening of the skin due to the leakage of erythrocytes from the vein into the surrounding tissue. It usually occurs in the ankle region, but it may extend to the leg and foot.

Treatment and care of pigmentation

Important to know: Pigmentation usually remains even after removal of the responsible varicose veins by surgery or sclerotherapy.

Lipodermatosclerosis (LDS) refers to a localized chronic inflammation and fibrosis of the skin and subcutaneous tissues of the lower leg that occurs in patients who have severe chronic venous disorders. LDS is sometimes preceded by diffuse inflammatory edema of the skin, which may be painful and is often referred to as hypodermitis. LDS must be differentiated from lymphangitis, erysipelas, or cellulitis by their characteristically different local signs and systemic features.

Treatment and care of LDS White atrophy, also called atrophie blanche, is a type of scar localized on the lower leg or foot. It is an often circular, whitish, and atrophic skin area surrounded by dilated capillaries and sometimes hyperpigmentation. It is a sign of severe CVD and represents late sequelae of lipodermatosclerosis where the skin has lost its nutrient blood flow.

Treatment and care of white atrophy 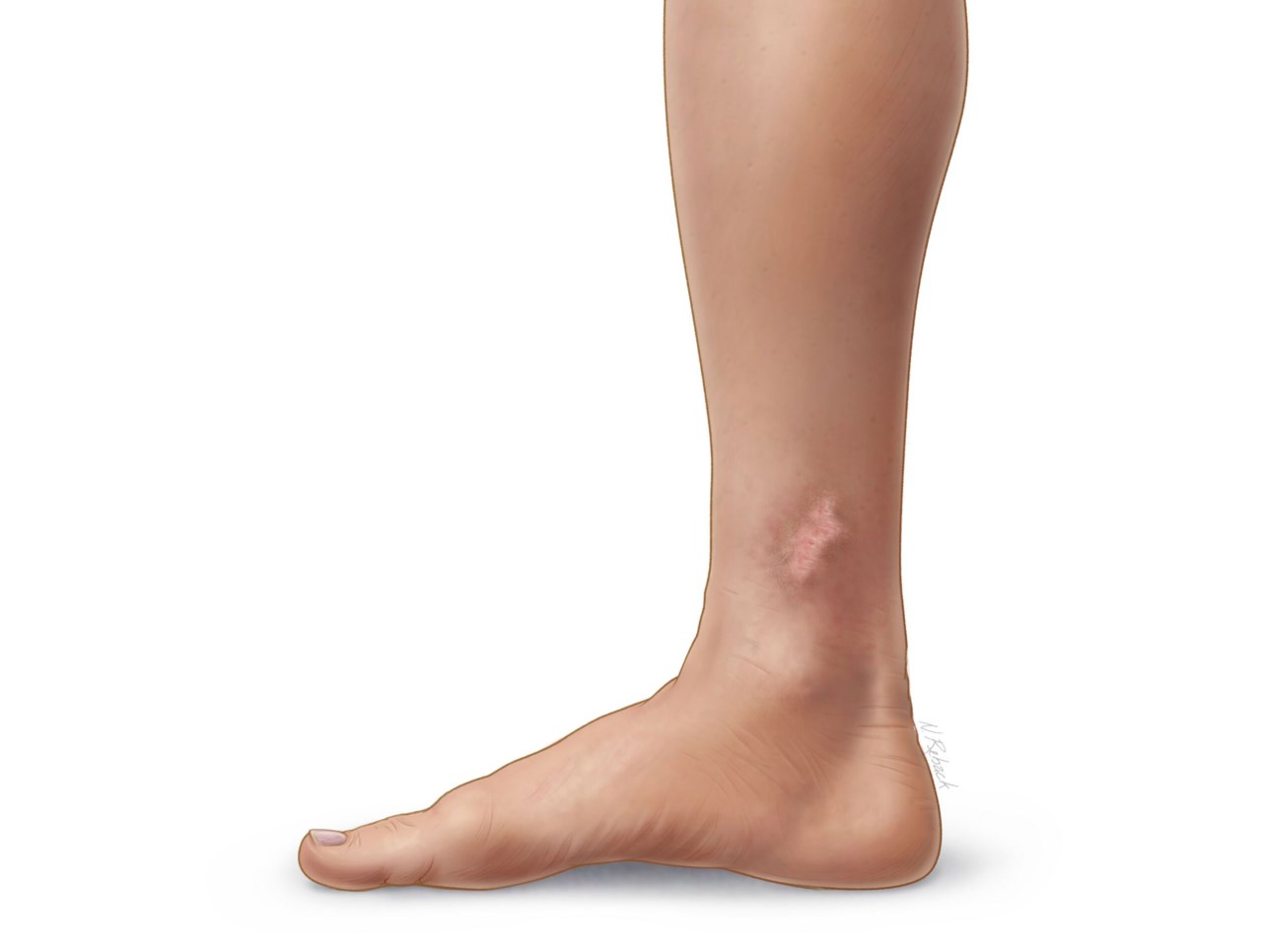 A venous leg ulcer is a full-thickness defect of the skin, most frequently in the ankle region, that fails to heal spontaneously and is sustained by CVD. An active leg ulcer is classified C6, while healed leg ulcers are classified C5 by means of the CEAP classification.

Venous leg ulcers are painful open lesions on the lower leg that occur in the presence of severe venous disease. The wound itself is often irregular and there may be weeping discharge as the tissue fluid seeps from the wound.

It is important to know that ulcers do not heal spontaneously, but that treatment options for this severe and often painful disease exist.

Treatment and care of leg ulcer

A venous leg ulcer may take months to heal.

Important to know: Nearly 80% of venous leg ulcers can be healed with good wound management. Once it has healed, the patient should wear a minimum of 30-40 mmHg Sigvaris medical graduated compression stockings for life to promote non-recurrence of the ulcer. Daily walks, a healthy diet, and weight control are also key in patient caring. 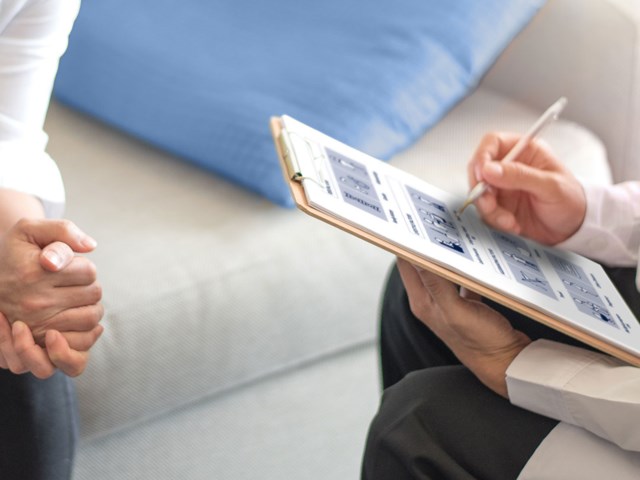 Many factors can unfavorably influence leg health. These can include lifestyle factors, such as reduced activity, obesity, and/or smoking. Other factors such as advanced age, gender, hormonal changes, and a family history of venous disorders are also influential. In these cases, compression wear may help to support leg health. Factors such as surgery and long-distance traveling bear an increased risk for the development of deep vein thrombosis (DVT). Wearing compression might prevent DVT to develop.
Read more 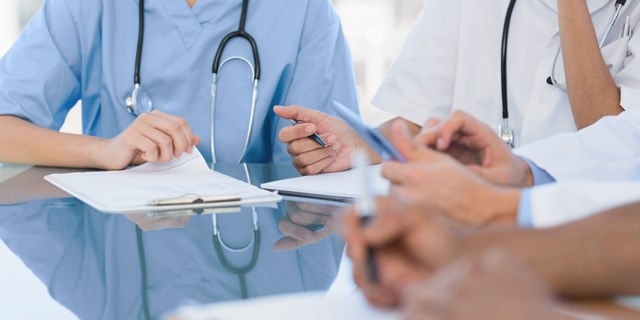 Acute manifestations of venous disorders such as pulmonary embolism or deep vein thrombosis usually occur without pre-existing conditions, but they can also be triggered by chronic venous disorders. In any case, medical treatment is immediately required.
Read more

What is compression therapy?

Medical compression therapy applies a type of elastic device on limbs or other body parts to exert a controlled pressure on them. Thereby, the device squeezes the vein walls together and improves the circulatory rate. Medical compression also helps with reduction of edema and recreates conditions beneficial for the healing of chronic inflammatory disorders.
Read more
Share this article
LinkedIn
Twitter
Facebook